Thule Vs Yakima Bike Rack: Which One Is Right For You?

Thule and Yakima are the titans of the industry especially when it comes to bike racks.

Thule and Yakima are the titans of the industry especially when it comes to bike racks.

It’s almost impossible to drive around your city and not see at least one of there bike racks mounted to a car, truck, or van.

You can only expect the best quality when you are getting either one of these brands.

In a head to head competition, Thule vs Yakima bike racks which one comes out on top?

I will answer your burning question today and you might just be surprised!

Before you can make the best choice on which company is better for you it’s important to understand the origin of both companies.

Both companies have a deep history and rich traditions that have made them into the juggernauts that they are today.

As you continue to read you will learn how these companies started and how they grew to make some of the best bike racks you can buy.

Thule was founded by the Thulin family in 1942 in Sweden. But it wasn’t until the 1960s that Thule grew rapidly because they began to specialize in roof racks.

Then in 1992, they came out with their very first bike rack that was mounted to the towbar. Thule continues to innovate bike racks this day.

Thule’s mission is to “transport anything you care for safely, easily, and in style, so you are free to live your active life.”

Yakima Industries was founded by Otto and Jeanne Lagerville in Yakima, Washington in 1973.

Now you know where they got there name from!

Otto was an inventor and loved paddleboarding. He made foot braces for canoes and kayaks in their small machine shop.

Fast forward to the 1984 summer Olympics in Los Angeles. Yakima built all the bike racks for the races that year.

They were also the official rack supplier of the 7-Eleven cycling team who would go on to win 9 gold medals.

Are Thule Or Yakima Racks Better?

Both companies have been around for a long time and you know you are going to get the best quality for both.

So how do you choose?

Well, let’s break down both brands and what they have to offer!

Thule price range is between $40 to $750. Most of there bike racks are in the $200 range. But, if you want a Thule hitch bike rack it will run you on the upper end of the price range.

Thule has different styles of racks:

Thule has 42 different bike racks to choose from!

Thule is known for its high-quality and stylish car racks that are great for hardcore cyclists to family outings.

They test all their racks in a special lab and they do field testing. They test their products for the safety of other drivers on the road as well as making sure your bike doesn’t take any damage and scratches.

The bike racks are easy to install onto your car and most of them don’t need any tools.

One major advantage to Thule is that all the accessories come with the rack. You won’t need to shell out extra cash on add ons.

Thule sells products in 145 countries around the world. So matter where you live you can easily get a rack that best fits your needs.

Are Thule Bike Racks Worth It?

Thule is one of the most well known and respect bike rack companies on the planet Earth!

Sure they are on the pricier side of bike racks. But, the more expensive price tag is well worth the extra reassurance that your bike and car won’t be damaged.

Thule bike racks last a long time but also have a lifetime warranty just in case something were to happen.

You can’t go wrong if you choose this company.

Yakima has 28 different bike racks you can choose from!

This company has been around for over 25 years and with that level of experience, you can trust they know how to make excellent bike racks.

Probably one of the coolest features that some of the Yakima bike racks come with a bottle opener. If you are of age and like a cold beverage after a long ride Yakima has you covered (or maybe root beer is more your style).

Toyota is a partner with Yakima. So if you drive a Toyota then you might want to consider Yakima products over Thule.

Yakima has also created one of the lightest bike racks the Yakima SingleSpeed which weighs only 20lbs. You can check it out on Amazon by clicking here!

Are Yakima Bike Racks Worth It?

Yakima’s main goal is to get your bike safely to your destination well on your car. Whether you decide to have your bike on the roof or on your trunk you can bet it’s safe.

Just like to lie all their racks come with a lifetime warranty. so if there are any issues they will be happy to replace the product free of charge.

Even though they don’t have as many options when it comes to the number of bike racks they offer, they do offer more styles of bike racks.

If you are a Jeep owner with a spare tire in the back then Yakima is the way to go because Thule doesn’t offer the type of bike rack you need.

A good majority of their bike racks also come with a locking feature. which is great because we all get lazy sometimes and decide to leave our bikes on the rack.

And if you happen to forget and you accidentally leave your bike on the rack you won’t have to worry about it getting stolen.

YAKIMA FrontLoader Check On Amazon
If you click this link and make a purchase, we earn a commission at no additional cost to you. 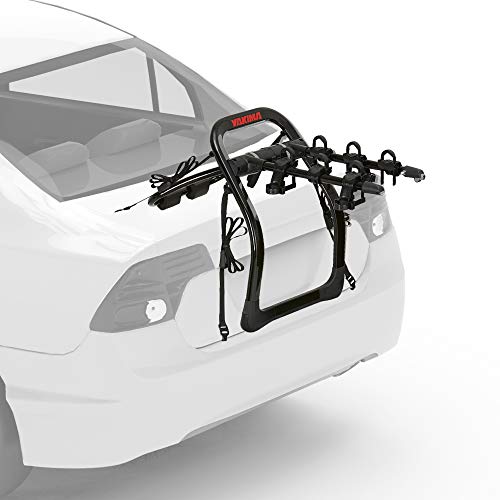 YAKIMA, Fullback Premium Trunk Bike Strap Rack
$259.00
Buy Now
If you click this link and make a purchase, we earn a commission at no additional cost to you.

YAKIMA Ridgeback Tilt-Away Hitch Bike Rack Check On Amazon
If you click this link and make a purchase, we earn a commission at no additional cost to you.

Thule EasyFold XT 2 Hitch Bike Rack Check On Amazon
If you click this link and make a purchase, we earn a commission at no additional cost to you.

Thule Raceway Pro Trunk Bike Rack Check On Amazon
If you click this link and make a purchase, we earn a commission at no additional cost to you.

Are Thule and Yakima Racks interchangeable?

Pretty much all of Thule and Yakima racks are interchangeable with each other.

Which is a good thing if you like for example Thule’s roof racks and Yakima’s crossbars.

But, if you want a more in-depth explanation on that topic you can read more about it in the next section.

Just a note of caution, you will most likely need to purchase an adapter if you would like to use the other company’s products.

Okay, so I see you just can’t make up your mind between which company is better.

And so you decided to go with both.

I can’t blame you it’s a really tough decision and sometimes there might be features to both that you like.

With that being said, can you combine two products from both companies and still make them work?

Well, the short answer is yes but let me explain.

If you’re interested in checking out this combination I will leave links to both products on Amazon.

Also, check out the Yakima Jetstream Crossbars by clicking here.

Some customers have said that Yakima uses round Crossbars because they are slightly sturdier and more aerodynamic. But this claim should be taken with a grain of salt because there is no evidence to back it up.

If this is true then it’s a big win and a good reason to go with both products. You might be able to save a few dollars on gas!

Deciding between these two companies can seem like an impossible task. But I can reassure you that no matter which company you choose it’s a safe bet that you will be satisfied with your decision.

Unless you are the owner of a Jeep in which case you have no choice but to choose Yakima, sorry!

Both brands offer high-quality products that you can trust because they have been at the top of the market for a very long time.

AUTHOR
Bryan Ray
Bryan Ray is the Co-Founder of The Biking Apex. He's a cyclist and a trainer who loves fitness and loves to teach people how to ride and maintain their bikes and bike accessories.

Keep in mind that we may receive comissions when you click our links and make a purchases. However, this does not impact our reviews and comparisons. We try our best to keep things fair and balanced, in order to help you make the best choice.

As An Amazon Associate I earn from qualifying purchases.

As a Ecotric affiliate I earn commission for qualifying purchases.

As a Eastern Mountain Sports affiliate I earn commission for qualifying purchases.

About Contact Us
The Biking Apex
close
Embed this image